Gökçe Komaç, A Study of Using a Persuasive Game as a Tool to Raise Awareness About Trolling Behavior

Abstract: Persuasive games are powerful instruments that have the potential to influence the audiences. Previous work reveals that there is a raise in awareness or change in knowledge, attitude and behavior after playing persuasive games on various topics. Although being very common, ‘trolling’ remains as a complex phenomenon in literature. This is due to it being insufficiently researched and having a lack of consensus about the definition among researchers. However, it is often associated with disruptive and deceptive behaviors in online spaces. A persuasive game that was aimed to raise awareness about trolling behavior was designed and developed for this study. By applying a descriptive research design method, this study (1) explores the disruptive behaviors that are considered as trolling in the context of online gaming, (2) observes if a persuasive game about trolling behavior could be used as a tool to raise ‘awareness’. The data was collected using an online questionnaire (N=129). It was found that insulting, trash-talking, feeding and griefing are the behaviors that are most commonly classified as trolling. Moreover, playing the game was observed to have slight influences in the participants’ perception of trolling: it was perceived to be a more negative phenomenon after playing the game. This study aims to contribute to the persuasive games and trolling literature by presenting findings about how trolling is perceived and how this perception was influenced by a persuasive game. 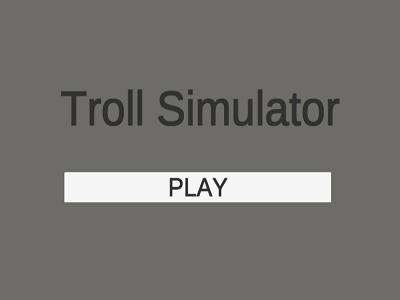